Feel like you’re falling behind your gaming buddies in WoW’s Mythic Plus, while all those short guides you find online make the possibility of catching up even more remote? Now’s the best time to make a positive change.

In this post, we’ll let you in on how to get started and succeed in this endlessly scaling challenge, while even getting your Keystone Master achievement along the way. 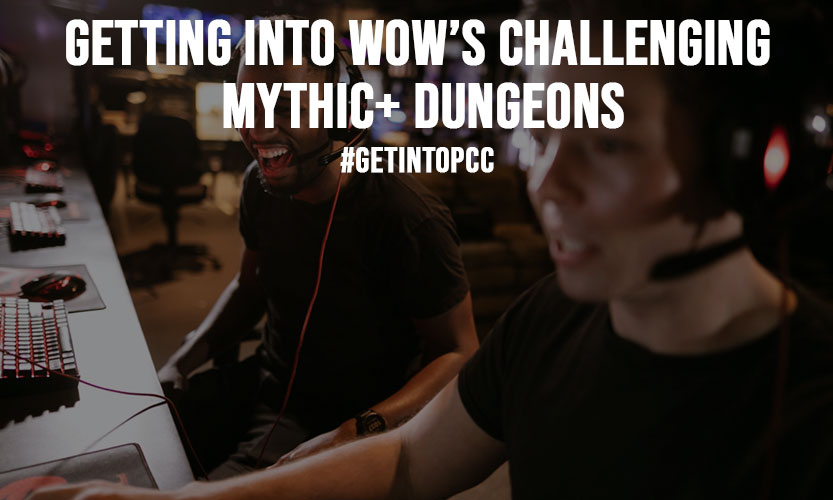 Keep reading for more on what Mythic Plus is, how to get into Mythic Plus dungeons, and the perks the whole thing brings.

The Basics of What Mythic+ Is & Why It’s Important

The Mythic Plus Dungeon system is a new five-man mode of content that focuses on adding progressively more challenging game levels compared to the initial Mythic run.

You’ll battle the same opponents as you would in the initial Mythic, but with tons of various complicated strategies and systems that make the challenge very tricky.

The mode is officially referred to as the Mythic Keystone system. However, gaming enthusiasts often call it Mythic Plus, Mythic+, or just M+.

Mythic Plus is all about having fun, earning better loot, as well as improving one’s skills. It’s a vital part of the World of Warcraft’s endgame grind, as well as one of the most exciting paths to acquiring high-level gear.

It also features WoW’s most difficult game content that requires solid knowledge of your class, the routes of each dungeon, as well as boss and monster potential.

The trick is that no matter how good you are at trusting your gut feeling and your overall gaming expertise, Mythic + dungeons are impossible to predict.

Furthermore, they come with certain constantly changing routes, a variety of community-designed plans, as well as specific rules to get to grips with.

Also Read: How To Play GameCube Games On A PC

Mythic Plus: Things Worth Knowing

Mastering WoW Shadowlands M+ Runs: To Boost or Not to Boost

If you’re not feeling very good at M+ this late in the season, considering a solid boost might currently be your best bet. You can easily find a professional boosting service that will aid you in going through any dungeon you are struggling with these days.

Whether you’ll want, say, your Mythic +15 carry keystone level dungeon completed by a pro booster, or prefer to beat all the Shadowlands dungeons under your own steam, the choice is entirely up to you.

If you stick to the latter option, we recommend that you begin keeping logs of your activity to effectively monitor your performance. Also, make sure you remember the meanings of the affixes. If you don’t, it might put you and your group in danger.

Tips on Succeeding as Tank

Tanks are probably the most important figures in your dungeon-pushing ambitions. The tank will most likely lead the whole team, while also setting the pace for the dungeon.

Below, you will find some of the vital hacks to being an excellent tank. You’ll need these tips irrespective of whether you play the tank interact with it:

Tips on Succeeding as Healer

Healers are responsible for keeping the team of players moving in the safest way possible. Healers prevent the group from making deadly decisions and dying. Healers do that nonstop.

This role is somewhat nerve-wracking, for when a player dies, the blame usually lies with the healer. If you’re a healer, you will need to learn how to keep your group alive, while subtly changing the battle dynamics to your advantage.

Here are some tips to achieve all of that:

Tips on Succeeding as DPS

To be a good DPS, you need to handle the damage done, as well as constantly explore battle peculiarities. In the majority of cases, it implies dodging or warding off certain waves of monster aggression, as well as planning specific strategies ahead and conducting unconventional interactions.

With regard to some more specific hacks on being an excellent DPS, find them below:

Reasons to Give Mythic+ a Go

The joy of gearing up your character, bolstering your skills, challenging yourself, overcoming difficult situations with friends. There’s a treasure trove of reasons why you might want to get into Wow’s grueling Mythic+ dungeons.

Now that you know how to get started, why not just take action and do it today! You won’t be disappointed, that’s a fact. Do you have anything to say on the topic? Comment below and get the discussion going.